MAY IS ELECTRICAL SAFETY MONTH!!!

Faulty Circuit Breakers In Thousands of Homes
May Cause Serious Fires

Circuit breakers are designed to keep you, your family and your property safe from fire, some breakers might not only fail to protect your family, they may cause a fire. 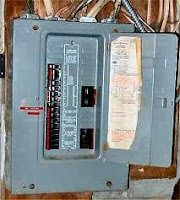 The breakers, mostly found in homes built before 1990, were made by Federal Pacific Electric and there are thousands of these breakers that are still installed in homes today.

Circuit breakers are designed to trip during an overload or short circuit, if the breaker doesn't trip, the increasing current causes excessive heat and can ignite a fire. Any circuit breaker can fail however Federal Pacific has the reputation of an extreme failure rate. Any competent Electrical Contractor would always suggest that Federal Pacific Electric breakers and panels be changed.. 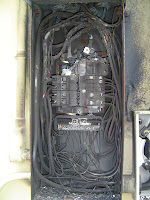 According to fire investigators, the Federal Pacific Electric breaker in Clarissa Rosario's New Jersey home did not trip when overheated wires were burning in the ceiling between her bedroom and the attic. “I saw the light flickering and I thought it wasn't normal,” said Rosario. “When I opened the attic, it was full of smoke.”

Engineer Jesse Aronstein has been studying the breakers for decades. He has testified in lawsuits against the company and published reports about the failures. According to his research, Federal Pacific Electric breakers may be associated with as many as 2,800 electrical fires each year in the U.S.

“People should know that these have a high defect rate and should be advised to have them replaced,” said Aronstein. Read More

May is Electrical Safety Month !!!