Now you can enjoy the energy-saving benefits of dimmable compact fluorescent lamps, but with improved ambiance and lighting options. The Decora CFL Slide Dimmer optimizes the performance of dimmable CFLs and works with the widest range of dimmable CFLs. Innovative and versatile, the preset dimmer in auto mode will detect whether a lamp is an incandescent or dimmable CFL, determine low-end dimming capabilities and adjust the dimmer range accordingly. It outperforms incandescent dimmers when controlling dimmable CFLs.

Posted by Advanced Electric Design & Service LLC at 5:31 AM No comments:

The Environmental Protection Agency April 23 announced efforts to expand its Lead-Safe Renovation, Repair and Painting (RRP) program, just one day after the program took effect.
The current rule exempts contractors from the RRP program if the homeowner certifies there is no child under the age of six and no pregnant women living in the home. However, beginning June 22, that exemption will be abolished and contractors renovating any pre-1978 residential building will have to be trained under the RRP program.
EPA also issued an advance notice of proposed rulemaking seeking to expand the RRP program to include public and commercial buildings, a policy the agency plans to finalize by July 2013.
Read More
Posted by Advanced Electric Design & Service LLC at 8:58 AM No comments:

Most Americans Unaware of Federal Phase-Out of Incandescent Light Bulbs 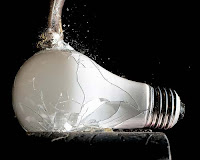 Using compact fluorescent bulbs to save energy is a no-brainer—and 82 percent of Americans are now on board, according to a GE Lighting study.
Americans’ voluntary switching from incandescent light bulbs to CFLs is a promising step toward smarter energy use.
These inefficient bulbs will get an extra kick out the door come January 1, 2012, when 100-watt incandescent light bulbs will no longer be sold.
Under the 2007 Energy Independence and Security Act, America will transition to more energy-efficient lighting, starting in 2012. Every year after that, incandescent light bulbs will see another cut: 75-watt bulbs will be phased out by 2013, and 40- and 60-watt bulbs by 2014.
While this is big step in energy conservation, most Americans are unaware of it; 75 percent of those surveyed have no idea that the government plans to phase out incandescent light bulbs.
Incandescent Lighting is not the only type of lighting being phased out, The standard T-12 flourescent lamp Ballast that has been the flourescent standard for decades has already been phased out and the T-12 flourescent lamps will soon follow.
Posted by Advanced Electric Design & Service LLC at 2:54 PM No comments: